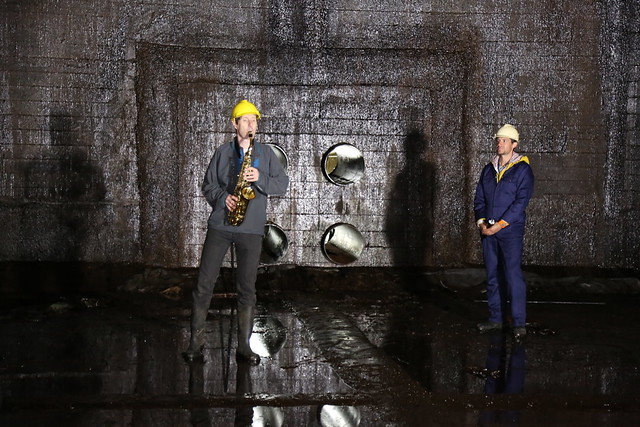 A few weeks ago I got to play my saxophone in the Inchindown Oil Tanks that hold the World record for the ‘longest echo’. If you haven’t seen the previous blog, you might want to listen to this recording that was captured on a mobile:

The recording is a bit rough and ready, but nevertheless captures the aural magic of the place. Recently, I replayed this recording at a couple of events about Sonic Wonderland/The Sound Book, and remarked on a couple of strange effects that I had noticed. But until now I hadn’t had time to examine the recordings in detail, to try and work out what is going on.

The extraordinary long reverberation time in the tank, means that old notes hang around for a very long time. But as I listen to the piece, I also notice notes that seem to emerge from the aural smog that seem to have no relationship to what has been previously played! Some of these notes appear to be at a higher frequency than the original notes in the tune. The effect is most noticeable at the end of phrases. Here is an example:

When a note is played on an instrument, it doesn’t just create sound at the particular note frequency, but also at other frequencies. These harmonics (or overtones) are at multiples of the fundamental frequency. The spectrum below is for the first note in the phrase, showing the expected regularly spaced peaks at 660, 1300, 1960, 2610 Hz etc. When listening to this note, the brain fuses the sounds from all the different frequencies to perceive just one musical note. This is one trick our brain does to simplify and help make sense of the sounds it hears.


By the end of the phrase, things have got messy. Can you spot the harmonic series in the spectrum below? This has been calculated for the few seconds during which  the last note in the phrase was played. Your ear can certainly pick out that last note from the audio sample, but it isn’t easy to spot in the graph.

The left most peak (390 Hz) is the fundamental from the note, and the first harmonic is visible as well (775 Hz). But most of the other harmonics are buried in a forest of other peaks. These additional peaks are left over sounds from previous notes.
Faced with this complicated harmonic spectrum, the ear hears some of the peaks as new high frequency sounds. This surprised me, because the fundamental and lower harmonics from the previous notes must still be there as well, but I guess these must be being masked by the sounds of the most recent notes.

One of the other magical effects is the way the harmonics warble, as illustrated by this short clip. It reminds me of the warble you get from a bell or gong as it reverberates, and is one of the reasons the lingering notes seem to diverge from their original saxophone voice to something more alien.

This is caused by something like beats. Beats are a well known acoustic phenomena that arises from the simple addition of two sound waves. When the frequencies of two sound waves are close together, you hear a single note at the average frequency, with a loudness that rapidly changes at a rate given by the difference in the frequencies.
When playing the saxophone in Inchindown, many current and previous notes add together, so what happens is a complicated addition of many sound waves. But the result has similarities to beats because the combined sounds don’t remain steady. Below is all the notes from the opening phrase of the piece played at once using a synth.

Although the notes are being played at a constant volume, the sound can be heard to vary in loudness and there is a slight pumping sound. Something similar causes the notes in the oil tank to warble.
Are there other sound effects on the video that I’ve missed? Or alternate explanations for what I have observed?

If you missed the inspiring interview with @RuthAmos http://www.inventivepodcast.com or a podcast app 👂🎧

The last episode of series 1 @PodInventive 🙍‍♂️ But A great one to finish on. @RuthAmos is such an inspiring engineer and I love how @jacqyallop explores the unintended consequences of the social distancing wings http://www.inventivepodcast.com or your usual podcast app 👂🎧

Saw this pictish carved stone in Forfar last week. Are these ancient social distancing wings as featured on @PodInventive @RuthAmos @jacqyallop ? Hear more about the modern versions on http://www.inventivepodcast.com