Some of my favourite sounds in Manchester can be found underneath the arches and bridges that were built during the industrial revolution. Dank corners of urban Manchester hide fluttering echoes, whispering arches and zinging sounds.
If you want to get a sense of what I mean, this video by artist Davide Tidoni shows how he revealed the hidden urban acoustics in Linz with nothing more than a bag of a balloons and a pin.

I spent this morning walking around Castlefield in Manchester trying to find the best sound effects. I’m doing this because I am running soundwalks as part of the Manchester Science Festival on the 26th October 2013. The soundwalk will seek out remarkable acoustic examples, revealing the acoustics through balloon bursts and music. I will then explain what the sounds reveal about the physics and how sound is perceived. 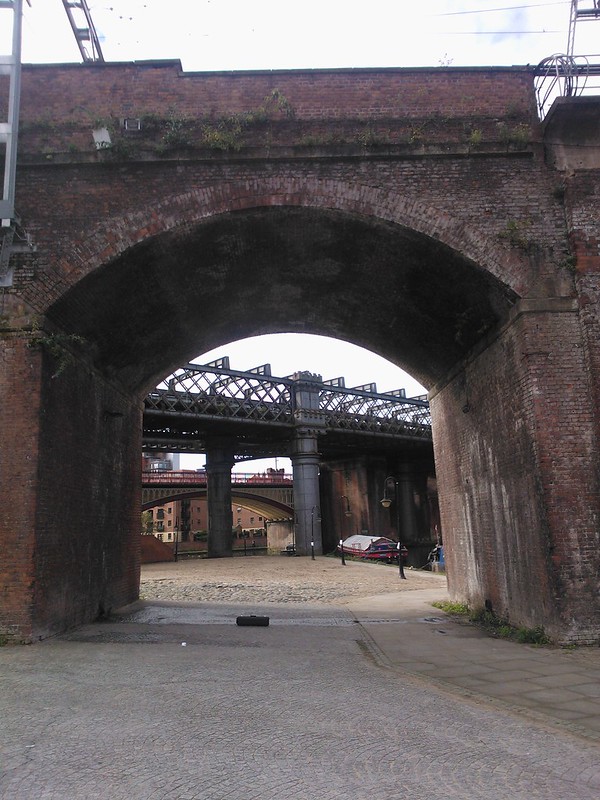 This is the arch which first gave me the idea of doing a soundwalk in inner city Manchester. One day walking through the arch, I noticed how my footsteps were suddenly amplified by reflections from the bricks. This morning I walked in and out of the arch playing my saxophone (Only for a little while because I didn’t want to distrub the canal boat owners on a Sunday morning). As I went underneath the arch in the middle, it sounded like I was entering a hall with a beautiful reverberance. The focussed reflections from the curved brick arch above made the sound linger, encouraging me to hit high notes, before stopping to hear how the notes slowly die away for maybe a second or so. Another trick I tried in a neighbouring arch was to play a series of notes and hear them overlap and harmonise with each other. I was inspired to do this after hearing about guards playing a similar game in the Baptistry in Pisa, Italy. 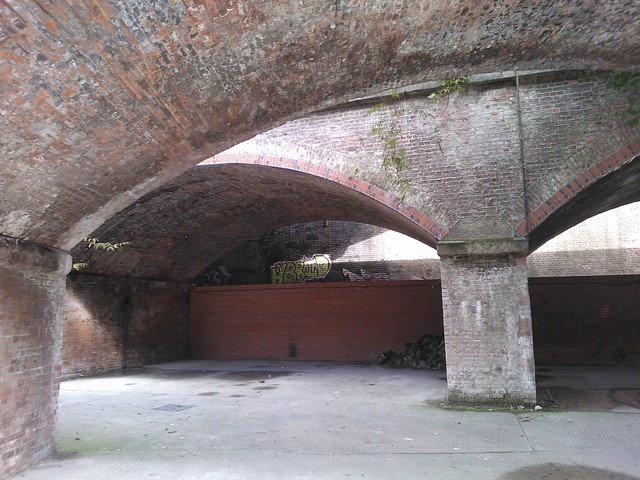 This arch had the most surprising sound effect. When I clapped my hands in the middle, I was rewarded with a rapid staccato of reflections bouncing past me. When I played the saxopone, the train of reflections picked out particular overtones in the notes and amplified them. After a while, it appeared that the echo was replying with different notes to the one I originally played! I’ll have to return with a digital recorder and capture the impulse response to work out what is going on underneath this arch, so I can give a good explanation to the soundwalkers.
I’ve now identified some great sound effects to show off. My only disappointment was that I didn’t find a good staircase that chirps (like the stairs of a Mayan pyramid). There were various flights of stairs I clapped my hands in front of, but any chirps were hidden by reflections off other nearby structures.
What other sound effects could I demonstrate on a soundwalk? Please comment below.

I remember that heat very well!

Sad to see FameLab go - been involved on and off since the launch, and the very first heats in @sim_manchester. https://www.telegraph.co.uk/education/3346943/FameLab-Our-hunt-for-the-pop-idols-of-science.html https://twitter.com/FameLab/status/1387004535961423873

Another Halloumi question: does it squeak more if raw or fried? I've got a demo sorted out for tomorrow, but I'm wondering if I should cook the Halloumi or not. Does cooking increase stick-slip?